Via Head admistrator of www.slinging.org 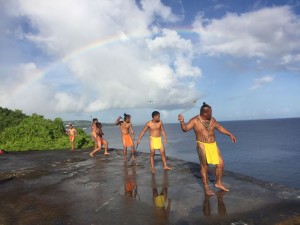 Guam and it’s potential impact on the global slinging community

In 2017 two men turned up at the international slinging meeting in mallorca. The meeting itself has been running for 5 years now and – to date – it’s the only organised meeting of slingers of different nationalities anywhere in the world.

So when a couple of guys turned up from Guam – a country nobody knew anything about, and most of us probably thought was somewhere in south america. It was a pleasant surprise, they’d travelled further – by some margin – than any other slingers. Friendly, enthusiastic and generous to a fault: they’d carried huge backpacks full of both rocks and merchandise halfway across the world to give away. After reading an article they had with them – they did seem surprised that I read the whole thing during dinner, I suspect everyone else had simply glanced at it – and talking their ears off during the brief time they were there: It turned out that not only was the Guam flag a slingstone, but Guam itself had a long and prestigious history of slinging and slingers. Coupled with a history of foreign occupation and concerted attempts to wipe out the Chamorro culture – something that after nearly 600 years still had not been acheived – Roman and Guelu were determined to bring back slinging as a way of re-connectiing with their ancestral culture.

I like to think I had a small hand in what happened next, I’ve been developing ideas over the years on how you get modern people slinging. You can’t do it by simply concentrating on historical or cultural aspects, as not everyone initially cares about that. You also can’t do it by just concentrating on target slinging. When I get a sympathetic ear about slinging, I’ll happily talk it off.

So the lads went back to Guam, recruited – what seemed like an army – and built slinging cages, held regular competitions, fundraisers, reached out to their local golf courses and started playing sling golf. They developed different types of slings – not just traditional ones, and quite frankly achieved something no other country or slinging community has ever done. I believe there are currently upwards of 300 active slingers on Guam and growing fast. By ‘active’ I mean people who sling regularly, have taken part in competitions and generally have a sling somewhere upon their person at all times.

To put this into perspective: in the entirety of the balearic isles (Ibiza, Mallorca and Menorca) there are probably less than 150 regular slingers. In the rest of the world there might be a further 4-500 – most of them part of roman and viking re-enactor groups.

I run slinging.org - the only dedicated slinging forum and website on the internet. To put this into perspective: there are thousands (quick search just brought up 6,000 results) of archery forums. Not archers, there are millions of those – just forums for archers. Slinging.org has been around for 15 years. I’ve been a  member for 13 of those and the Administrator for the last 7 or 8. So if anyone anywhere in the world has an interest in slings – I am generally the first port of call.

I’m not sure anyone else has the knowlege or perspective to really appreciate just how small the global slinging community really is. Numbers in the balearic islands are gradually going down, and staying fairly stable in the rest of the world, where slingers tend to be widely scattered geographically.

So when I watched what was happening In Guam over the last 12 months – I was both amazed and filled with elation. To go from a few guys trying to reconnect with their ancestral culture, to a full blown – and modern – culture of slinging and slingers, in such a short space of time, is completely unprecedented.

Roll forward to march 2018 and the 5th International in Mallorca. Guam had promised to come back with a small army and that’s what they did

6 Active slingers – I suspect the total travel mileage exceeded the rest of us combined – covering all categories from women to children. Did they come to make up numbers ? Oh hell no, they came to compete and to win ! Josiah – at 7 years old, took home 3 trophies, what an adventure he had ! Roman, took home 2 trophies, one for the most dianas (bullseyes) in a competition. Brandi also took home 2 trophies.

Again, to try and put this into perspective: all the top guys and women in the world were present (few as they are), these trophies were not given away, they were won on genuine merit ! Even the Guamians who did not win, acquitted themselves well and no doubt will be back next year with trophies in mind.

In the first 4 internationals, most of the trophies were won by balearic islanders. With the occasional german, spaniard, austrian and englishman (myself) taking the odd one. In the fifth and most recent international a considerable amount were taken by non-spanish or balearic islanders. Guam taking the lions share. It’s a result unprecedented in the world of slinging and sport in general.

For someone like myself, who has been trying to promote slinging for so long, with very little result, it’s fantastic. The drive, enthusiasm and sheer skill of Guamian slingers has not only heralded a new era in the global slinging community, but it has set completely new standards in how to promote slinging and slings. I’m looking forward with more hope than I ever thought I would have, to slinging becoming a true international sport – and with Guam and it’s Fokai spirit and Chamorro people in the forefront. I feel there is finally hope that the slinger will not die out, but eventually become a common figure in the sporting world.

Åcho’ atupat Slingstones were used as weapons by ancient Chamorro warriors. Slingstones are stones of various sizes sharpened at both ends and hurled from a sling with deadly force in combative times.

About six months ago, Christian Sam Wirk of Austria turned the heads of our small group of stone slingers when he said there would be an international slinging tournament in Spain. When he told us thr